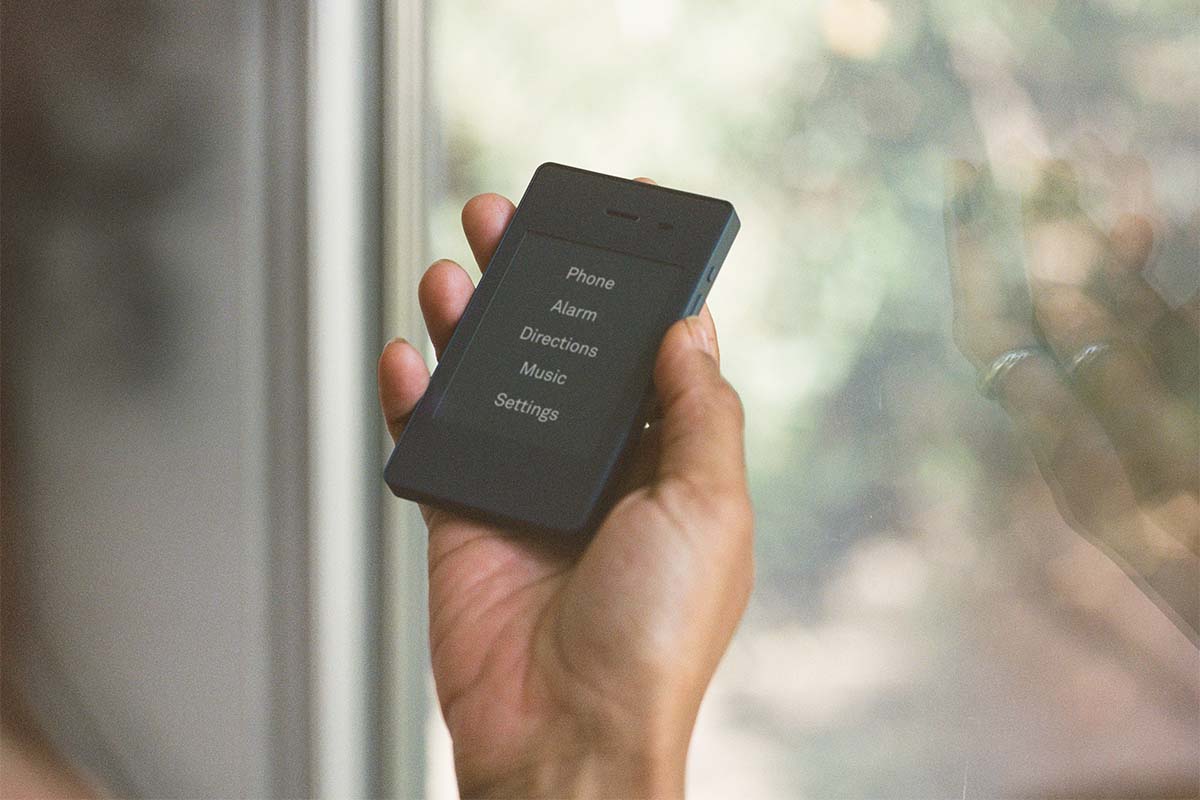 The proliferation of smartphones has ushered in an Era of Distraction. In the past five years, well-documented reports of smartphone-addicted teens—and adults for that matter—highlight just how serious the issue is. And there’s almost no end in sight.

There are over 6 billion smartphones globally. Their planned obsolescence means with each sales cycle, big tech needs to mine for more precious metals and use more unsustainable materials to keep churning them out.

Start your path to net-zero

Get the tool that helps companies make business decisions with the environment in mind.

Helping fix the attention economy is precisely what the Light set out to do. Launched in 2015 on Kickstarter, Light Phone’s original value prop: “A credit card-sized cell phone designed to be used as little as possible. The Light Phone is your phone away from phone.”

Since then, the small company has launched the Light Phone II, which, as CNET puts it, “purposely lacks many familiar phone tools like a camera and internet browser because it’s made to be used as infrequently as possible.”

So what does a minimalist phone have to do with sustainability? With the advent of its second model, Light Phone published an impressive sustainability report detailing the process of understanding the carbon footprint of its phone.

We caught up with co-founder Joe Hollier over email about Light’s sustainability priorities.

Sustain.Life: Light Phone started with a mission to curb reliance and smartphone addiction. But where did your commitment or interest in making a more sustainable phone come into play?

Joe Hollier: The personal and larger societal effects of our smartphone overuse primarily motivated us to want to do something different in the first place. We felt this was directly related to the advertising-based attention economy of many platforms like social media and news on our smartphones. The phones themselves had become our nervous crutches. On top of that, the blatant disrespect for user privacy was another issue that bothered us.

While I’m hesitant to say that we’ve made a more sustainable phone with the Light Phone II, one aspect of sustainability that was important from the get-go was fighting planned obsolescence. Through marketing and, in some cases, intentionally crippling older devices, companies encourage us to get a new phone every year, although our current phone is more than capable and has plenty of potential life ahead.

We knew we wouldn’t be able to deliver all of our features from the first day we began shipping, so we tried to imagine how we wanted the phone to grow and anticipate future features. For example, our Directions tool we would eventually roll out with software updates to ensure our hardware could support a variety of upgrades and that the phone could last users as long as the hardware itself would hold out. The Light Phone II began shipping over two years ago, and we’re still very focused on improving everything we can about the phone without enticing our users with new models each year because of business motivations to sell more phones. It’s easier for a simple phone like Light than smartphones, perhaps, but the alternative of getting a new phone every year for some minor spec or performance update seems incredibly wasteful.

SL: You published an extremely robust—a 30-minute read—sustainability report in 2020. What was the impetus for that?

JH: It’s hard for us not to think of the potential environmental side effects of producing tens of thousands of phones. The impetus for the report itself is really inspiring. It came from our own software team’s interest. It became a passion project of our team and something we worked on outside of the “normal work”. We also worked with Brian Lehrer to conduct the LCA, who is not a team member at Light, as we wanted to ensure objectivity in the report itself.

Our primary objective with the report was to start a conversation with our users and all consumers of technology about our footprint and what we could start to do going forward. We knew going into the report that looking just at carbon emissions is only one angle of the environmental effects of consumer technology. We also knew that even carbon offsetting itself is a reactionary step. We’ve already produced the phones that are out in the world, so this felt like one measure we could take now. We also hoped it would help inform ways to improve sustainability in any future products we would come to build.

SL: What’s been the reception of the report? Has it helped your marketing efforts?

JH: I would say that we have never intended it to be a marketing play in that the report would be the leading reason someone might choose the Light Phone II. In our minds, it was just a further commitment to our shared values with our users. In that way, it has helped solidify our brand, but we didn’t see an uptick in phone sales because of the report per se. I do think it has been well received by our users, and the optional carbon offset option in our checkout is popular with the majority of our users choosing to split the offset with Light.

SL: Light Phone performed a lightweight life cycle assessment. For those that might not know what an LCA is, could you shed some light—no pun intended—on the process?

JH: The goal of an LCA is to understand the total impact of a device from raw material acquisition through production, transportation, usage, and its eventual end of life. A popular format for LCAs breaks down a product into its material components, often called a Bill of Materials, and then attempt to measure each of these components along that journey. We call our approach “light weight” because we relied on a lot of secondary data for a lot of components, which is quite normal for this type of reporting, especially considering most products today consist of hundreds of inputs coming from a complex globalized supply chain. We tried to make this process as transparent as possible in the report and the supporting tables that show the breakdowns.

Also, considering we wanted to make as big of an impact as possible if there were ranges in the data, we always chose to overestimate the carbon emissions at any given step or component.

SL: What would you do differently if you were to do it again?

JH: If we were to go back to our early R&D phases of the Light Phone II, there are certainly some things I wish we had the resources at the time to explore differently, particularly around repairability with the Light Phone II. Like most smartphones, it’s not great. The Light Phone II was a crowdfunded project, which inherently shows how limited our budgets were for explorations. We also had set an ambitious timeline to deliver to our backers, putting pressure on getting a workable phone out in a timely fashion as our main priority. Repairability was an afterthought in that regard.

As a small player in the tech landscape, we often feel limited in our leverage thus far to really make other sweeping changes in the industry, but what we can do is speak openly and frankly, more than other companies perhaps, about the situation. From creating our sustainability report to sharing photographs from the production lines as starting points for the conversation around how we can make a difference with sustainability and other aspects of human rights and fair treatment of works. Would consumers pay more for a more sustainable or more ethically built phone? Perhaps if we can help educate each other on the importance of this, we can begin to move in that direction together. This joint effort is one reason that Light matches carbon offsets with our users 50/50.

SL: Users have the option to offset their phone’s carbon for about three bucks. It raises awareness (“Oh, there’s a carbon footprint associated with this thing I use every day?”), and also normalizes this idea that consumers should consider offsetting the carbon for something they buy. Do you envision more companies doing this?

JH: Awareness is definitely the goal. Splitting the carbon offset feels like a nice step we can take together in a shared interest. It is Light’s responsibility, of course, but also ours as consumers, to try our best to understand our impacts and make differences where we can. We’d, of course, love to see more companies offering options like this!

SL: Your approach to offsets is refreshing and grounded in reality. Could you talk more about how and why you decided to approach it the way you did?

JH: We took finding the right approach seriously because we weren’t doing this purely for marketing, and we wanted to genuinely offset the carbon that we’ve contributed to emitting in the first place. Our search led us in the direction of a carbon sequestration method colloquially referred to as “‘carbon farming.”’ The basic idea behind carbon farming is to modify farming methods in a way that leads to a measurable increase in the amount of carbon stored in the soil. All plants store carbon naturally as they carry out photosynthesis. This carbon comes from CO2 in the air surrounding them, the same CO2 that contributes to climate change if too concentrated. Carbon offsetting has many challenges, from leakage to accuracy accounting, and we chose a partner which we feel takes these challenges seriously. The costs are $100/ton, which is much higher than more typical market rate of $7/ton.

SL: I know you’re developing formal guidelines for recycling your phones when they’ve reached the end of their useful life. What goes into that process?

JH: There are a few things we are doing. One on hand, we’ve been creating some custom rigs so we are able to do more extensive repairs locally in our NYC office on phones, reusing as much of broken phones as we possibly can for refurbishing Light Phones.

We’ve been vetting partners for when it comes to phones that have reached their end of life. One partner we’re likely moving forward with will help us make the most of all the abandoned phones, including a user’s old smartphone if they’d like, and we’ll provide free shipping labels for those phones to be sent to our partner. They begin by removing every component that can be reused and sell them back into the market, which in the hierarchy of the R’s, reusing is the best for the environment. Other components can be broken down to their raw materials and then resold and reused as well. And finally, anything that cannot be reused is disposed of in the most appropriate way. There is actually some revenue generated in this breaking down of old devices, which will be donated to organizations that work to further offset the environmental impacts of consumer technology, especially around raw material mining.

SL: Anything else we should know about Light’s sustainability practices?

JH: A few other areas in which we’ve taken sustainability seriously include the Light Phone II packaging, which is made of recycled cardboard, without any of the typical foams or plastics often used. We layered the cardboard to offer similar protection as one would expect.

We’re also currently experimenting with recycled materials for our protective cases to try and make those more environmentally friendly as well. In general, we feel this is very much the beginning of what is possible with sustainability and consumer technology. We look at companies like Fairphone as an inspiration on this front too. There are a lot of challenges in pulling this off as a small, resource-strapped team, and we hope that as we grow, we can implement more tangible measures ongoing.

• Light published a sustainability report in 2020 detailing the carbon footprint of its Light Phone II.

• In addition to packaging improvements and end-of-life options, the company also gives customers the option to offset the phone’s associated carbon emisisons.